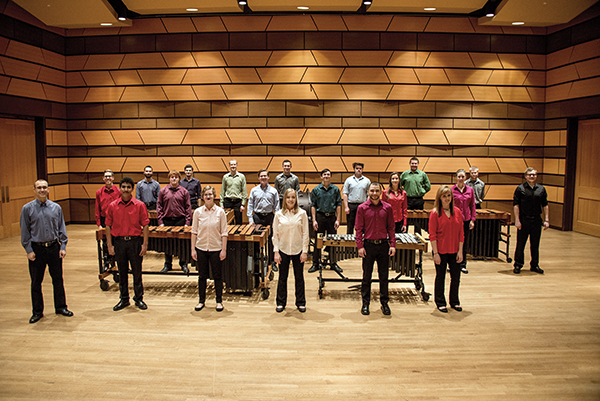 Eric R. Hollenbeck, Professor of Percussion at Colorado State University since the fall of 2003, earned a Doctorate of Music in Percussion Performance from Northwestern University in Evanston, Illinois. Eric has performed in England, Ecuador, Mexico, Canada, and over thirty universities in the United States. He has presented clinics and master classes at the Midwest band and Orchestra Clinic, Interlochen, TMEA, MENC and CMEA state conventions and as a featured performer at the 1996, 2001, 2007, and 2011 Percussive Arts Society International Conventions. Eric was awarded “Outstanding Teacher of the Year” by Colorado State University in 2008.

The Percussion Ensemble at Colorado State University in Fort Collins, Colorado is a diverse and innovative program that has set high standards in percussion education and performance.  Performing primarily chamber works, the group remains open to all styles and genres and shares concerts with the CSU World Percussion Ensemble. The ensemble has performed with many extraordinary percussionists such as Michael Burritt, Bob Becker, Eric Sammut, Kevin Bobo, Mark Ford, Susan Powell, She-e Wu, Anders Astrand and others.  The ensemble was featured at the PASIC New Music Literature session in 2010.