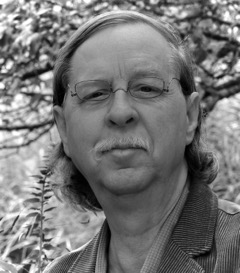 GORDON STOUT (b.1952) was Professor of Percussion at the School of Music, Ithaca College, Ithaca, N.Y., where he taught from 1980 through 2019. A composer as well as percussionist who specializes on marimba, he has studied composition with Joseph Schwantner, Samuel Adler and Warren Benson, and percussion with James Salmon and John Beck.

Many of his compositions for marimba are published, and have already become standard repertoire for marimbists world-wide. A frequent lecture-recitalist for the Percussive Arts Society, he has appeared at more than a dozen International PAS Conventions to date as featured marimbist, as well as throughout the United States and Canada, Europe, Japan, Taiwan, Thailand, Singapore, Hungary, Bulgaria, Mexico, Denmark, Puerto Rico, Italy, Greece, and Spain.. In May of 1983 he performed clinics and recitals in France, Germany, Holland and Belgium with “transcendental virtuosity” being described as “the Rubinstein of all aspects of the marimba”.

Gordon has been on the Jury of seven different international marimba competitions. On new years day in 2006 he conducted a 100 person marimba orchestra in the National Concert Hall in Taipei, Taiwan as part of the Taiwan International Percussion Convention. His composition “New York Triptych” for marimba orchestra, was commissioned by and written for the 50th anniversary celebration of the Percussive Arts Society, premiered at PASIC 2011 in Indianapolis, IN. He has also conducted marimba orchestras in Australia, Croatia, and throughout the United States. Most recently he conducted a marimba orchestra of 75 persons on 120 marimbas at Kutztown University in PA in November of 2015.

Gordon was inducted into the Percussive Arts Society Hall of Fame in November of 2012. Gordon Stout owns and plays a marimba manufactured by DeMorrow Instruments (www.demorrowinstruments.com). He is the creator of Young Composers International (www.youngcomposersinternational.com), a service dedicated to disseminating new and interesting works for marimba and percussion written by young composers from around the world. In 2019 his newest venture is being launched: G&C Music, which will be the new home of Full Circle Publications and StoutWorks.

About the Marimba Orchestra

To participate in the Marimba Orchestra:

Applicants are responsible for obtaining all audition materials with the exception of the First Marimba part for Bolero, which can be downloaded below:

Thanks to Meredith Music Publications for permission to use this music.