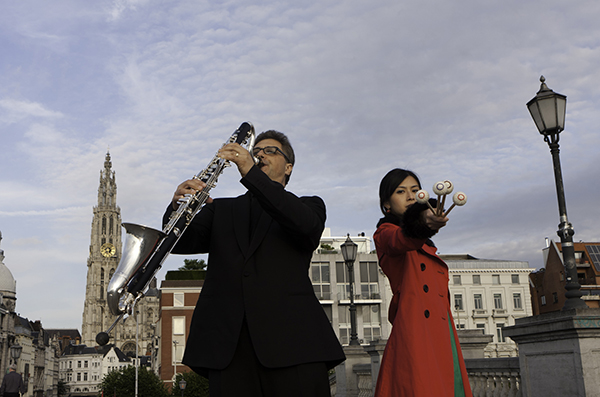 Duo Antwerp is formed by marimbist Adilia Yip and bass clarinettist Daniel Bellovi since 2012. The duo has been praised by music professionals and public audience for their exquisite lyrical interpretation. They have been invited to perform at prestige music festivals and cultural venues, to name a few: 33rd International Festival of Music of the Canary Islands, Belgian Music Days (Leuven), 5th European Clarinet Festival (Gent), Auditori de La Beneficencia de Valencia, COSI COVA Valencia, Hong Kong City Hall and Instituto Cervantes Pekin. They have collaborated with Municipal Band of Vitoria-Gasteiz, Hong Kong Festival Wind Orchestra and Koninklijk Harmonieorkest Schelle, under the baton of maestros Hilario Extremania, Carl Choi and prof. Dirk De Caluwe. The duo has already commissioned more than 200 minutes of new music from composers worldwide. Their dedicated and commissioned works are published in “Duo Antwerp Collection” by Musicvall and collected in the CD recording “From Spain”.

ABOUT THE KEYBOARD FOCUS SESSION: The Contrasting Sounds of Wood

The Spanish Dream (2014) by Spanish composer and conductor Pere Sanz is a dedicated work comprises one of the most important musical styles of the vast Spanish culture. The energetic music uses two traditional Spanish rhythms: the Bulerías rhythm and a majestic Malagueña to express the spirit of the Spanish culture.

Searching (2005) by Belgian composer prof. Wim Henderickx is a work that represents the musical language of our time. Consists of five contrasting parts, the basic material is built from opposite symmetrical positions of intervals and chords. The work is a result of the composer’s liking for the instruments, and the adventurous quest during his early career.