The Ju Percussion Group, founded by percussionist Ju, Tzong-Ching in January 1986. The group devotes itself to performance, education and percussion promotion. The Ju Percussion Group has become known worldwide for its innovative blends of the East and West, traditional and contemporary. The members possess transcendental virtuosity in playing Western Percussion instruments as well as different forms of traditional Asian music.

Through more than 3,000 domestic and international performances, it has greatly expanded Taiwan’s presence on the international percussion map. To date, the group has played in 34 different countries around the world, cultivating more than 130,000 percussion learners by means of its instruction system. Besides, the group has been commissioned to create as many as 242 pieces so far. The growth of Ju Percussion Group is, so to speak, a reflection of how contemporary percussion develops on the island.

From Taiwan, Ju Percussion Group, after almost thirty-five years, its footprints have crossed the world, using its music to convey and touch on innumerable emotions and memories. Praised and received with adoration not only by local Taiwan audiences, but international once as well. On January 2, 1986,  the Ju Percussion Group was established. In retrospect, but also looking ahead, from the basic instinct of the original heartbeat, embracing the passion to be consistent to the end ; practical progress, unending encouragement, embarking on a more refined, deeply etched, expansive and professional journey. Sharing the emotions of the rhythm, let percussion transform itself to be an unyielding source of creative energy and the medium of cultural exchange, and let the cultural art of Taiwan unleash its emotional furor to become a catalyst of energy whose vibration touches the world. 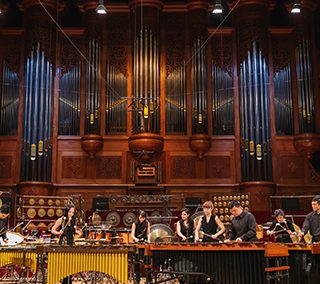