Michael Rosen is Professor of Percussion at Oberlin Conservatory of Music and is Director of the Oberlin Percussion Group and Oberlin Percussion Institute. He was Principal Percussionist with the Milwaukee Symphony from 1966 to 1972 and has performed with the Grand Teton Music Festival the Cleveland Orchestra and the Concertgebouw Orchestra. A native of Philadelphia, he was a student of Charles Owen, Fred Hinger and Cloyd Duff. Mr. Rosen has been a member of the Board of Directors of PAS and maintains a column in PN entitled Terms Used in Percussion. He has recorded for Opus One, Bayerische Rundfunk, Albany, Lumina and CRI labels and is a clinician for marimba as well as cymbals. Rosen has concertized and taught extensively in France, Italy, Germany, Spain, Denmark, Finland, Hong Kong and Beijing. In 2014 he was awarded the Lifetime Achievement Award by the Percussive Arts Society and in the same year received the Ruth Strickland Gardner Professorship from the Conservatory. 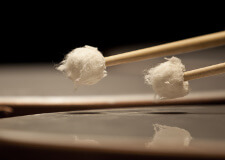